I have a theory about conspiracies…

Home/Random Musings, Uncategorized/I have a theory about conspiracies…
Previous Next

I have a theory about conspiracies…

History: “What do the mafia, Watergate, the Gulf of Tonkin, the Tuskegee syphilis study, Operation Mockingbird, and government mind control have in common?”
Me: “Ooh! I know! Pick me!”
History: “Jenna?”
Me: “They’re all conspiracy theories!”
History: “Well, that’s partially true. They were ‘conspiracy theories’… until they turned out to be true.”
Me: “Dammit! That’s what I meant.”

(History: “If you don’t know about Operation Mockingbird, let me enlighten you. Operation Mockingbird was a secret campaign by the CIA to infiltrate and influence the media in the 1950s. As part of the operation, they recruited and paid hundreds of journalists to write and publish fake news. The covert operation was uncovered in Senate hearings… twenty years later. Go ahead and let that nugget sink in.”)

By definition, a conspiracy is “a secret plan by a group to do something unlawful or harmful.” A theory is “an idea used to account for a situation or to justify a course of action.”

So, a conspiracy theorist is someone who suspects that someone is doing something dirty and then makes choices for their life based on that suspicion.

Hi. My name is Jenna, and I am a conspiracy theorist.

Our government and governments of free societies everywhere want everyone under their rule, young and old, healthy and unwell, religious or atheist, to submit to an experimental injection. Sorry, a lifetime of experimental injections. They’ve launched the mother of all propaganda campaigns, and as a writer with a marketing background, I’ve got to give it to them: if public regurgitation is any indication, that campaign’s been a success with a frightening swath of the population.

I mean sure, they’ve lied, backpedaled, coerced, bribed, threatened, and smeared scientists and doctors and Nobel Prize winners, but their jingles work. They’re as catchy and memorable as the Oscar Mayer Weiner song!

“Do it for your grandma/neighbor/community.” (So compelling! So sweet! So noble! Except for the part where your vaccine protects you and nobody else. This is not up for debate.)

“Do it to get your life back.” (“As long as you keep getting your boosters, you’ll be free! Well, unless another new variant comes along that your booster can’t protect you from, in which case we’ll have to shut your businesses and lock you up at home again. Oh, shit. There it is. Obviously, it’s all the selfish, unvaccinated peoples’ fault, even though you can get it and spread it equally. It’s called science. Just keep doing what we tell you to do, okay?”)

“It’s a pandemic of the unvaccinated.” (Yeah… except that many of the most highly vaccinated states including Vermont, Massachusetts, Maine and Connecticut are seeing their biggest spikes in COVID hospitalizations and deaths of the pandemic. Well, this is awkward.) 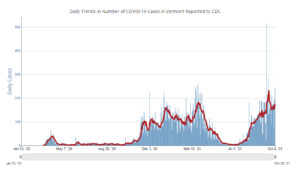 Vermont is the #1 MOST VACCINATED STATE in the US.

“It’s safe and effective.” (Prior vaccine rollouts have been halted for five deaths. Our reporting system now lists over 16,000, and is estimated by a Harvard study to be a fraction (like 1%) of all incidents. Several countries have banned or limited the Moderna vaccine due to its risk of heart complications. Why only Moderna? Why only some groups? According to latest figures from the World Health Organization’s database of adverse reactions to the collective vaccines, there have been 109,471 instances of cardiac disorders reported. Why is Moderna still full speed ahead in the US?)

“Vaccines prevent infection and transmission.” (Well, that’s what they said. Until they were forced to backpedal and admit they don’t. Even a little.) 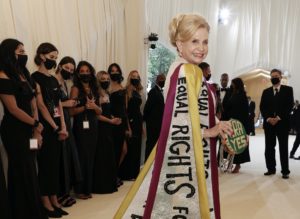 “Kids need to be vaccinated!”  (A total of 543 kids under 18 [out of a total US population of 73 million children] have died with COVID since the start of the pandemic. According to a research team at Johns Hopkins, the mortality rate among children without a preexisting condition (such as cancer or diabetes) is ZERO. Pfizer’s deal with the US government earns them around $20/dose, meaning they rake in almost $1.5 billion per round of shots if they’re vaccinating every child in the US. What’s that? Now everyone needs three a year? It’s such a shame no one can profit from keeping your kids healthy! Rats.)

“You’re not a horse.” (You’re also not a cow but you drink cow’s milk. The ivermectin smear-job was swift and sweeping and cost the world hundreds of thousands of lives. It’s okay to be pissed about that. Really.)

“Anyone who disagrees with us is a CONSPIRACY THEORIST!” (Again, props to the propaganda masters for that whole “disinformation dozen” campaign. That libelous story got picked up faster than a floating hundred dollar bill at Disneyland.  Careers were crushed, reputations were ruined, but at least those dastardly dozen weren’t out there trying to tell you how to treat COVID at home and stay out of the hospital and maybe not die anymore! I mean, that would have been tragic.)

Here’s the thing: The jabbed-and-proud want to label everyone in the massive (and growing) vaccine-hesitant camp “conspiracy theorists.” But since we have no long-term safety or efficacy data, aren’t we ALL theorizing? And is it that much of a stretch to worry–even for just a brief, fleeting moment–that the same governmental agency that once approved Accutane, Darvocet, Vioxx, Quaaludes (yes, Quaaludes) and thousands of other now banned medicines and medical devices might not be the very most trustworthy? Or AT LEAST might not be infallible? Pfizer alone has a “penalty total” of healthcare related offenses of 3,373,675,000 [not a typo] and over a billion more in offenses related to government contracting, marketing and safety. Cheap, effective medications are available (as proven by hundreds of studies that have been censored; look up Utter Pradesh in India; they’ve reduced COVID by 99% [also not a typo] by giving out ivermectin for home use; there are many, many others), but they’ve been mocked and ridiculed, for one reason: to push the “vaccines are the only way out of this” agenda and to make room for newer, far more expensive (i.e. lucrative) options.

At least, that’s my theory. 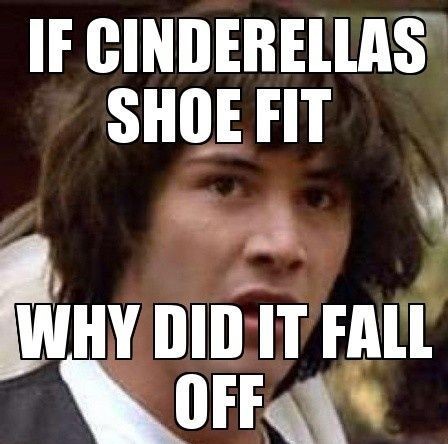