Will I ever learn? (Spoiler: Nope)

Home/Random Musings, Uncategorized/Will I ever learn? (Spoiler: Nope)
Previous Next

Will I ever learn? (Spoiler: Nope) 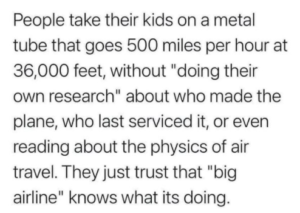 It’s “it’s” you dumbass, but I suppose that’s not the point.

If you’ve met me even once, briefly, you know I couldn’t.

“True, but they probably wouldn’t put them on a brand new, experimental tube that had already injured millions or killed tens of thousands.”

Guess I made Brandon mad.

“Bull. It has not ‘injured millions or killed tens of thousands.’ And such disinformation is dangerous,” Brandon scolded me, puffs of cartoon steam (I imagined) streaming out of his ears.

I replied with a link to the WHO database that tracks these things, which currently lists 2,262,130 adverse reactions to C-19 vaccinations and screenshots of some of the numbers.

Brandon DID NOT LIKE THIS ONE BIT. He called me “sadly gullible,” and “a dangerous cheerleader for ridiculous sources,” and accused me of MISREADING [his shouting, not mine] WHO data. His friends chimed in with condescending explanations of fancy terms like correlation and causation and accused me of skipping lots of classes in life. Apparently, we are not to make the wild and farfetched assumption that just because an otherwise healthy person has a heart attack or suddenly experiences facial paralysis or an inexplicable full body rash or drops dead the day after the vaccine that any of these things was caused by the vaccine. That would be like saying if you get in a fatal car accident and your cousin’s friend has COVID at the time, you died of COVID.

Walk away, Jenna. You won’t change his mind. It’s not worth your–

“I am ‘sadly gullible,’ I replied, “says the guy who puts unbridled blind faith in governmental agencies that have approved hundreds of medicines and medical devices that have later been recalled for injuring and killing countless people, and in a drug company was forced to pay the largest health care fraud settlement in history for repeatedly engaging in illegal and corrupt marketing practices, bribing physicians and suppressing adverse trial results. You can get angry and defensive all you like, but there is no question that these vaccines have caused more harm in one year than all other vaccines on the planet combined in history. You’re not curious about what the censored scientists and doctors have to say about all of this? You don’t worry about outright lies perpetuated in the media (“You’re not a horse,” to disparage the medicine that wiped out COVID completely in a country of 250 million people, for example)? You think it makes sense to come after kids with an experimental drug with no long-term safety data to treat a disease they are 99.99997% likely to survive? (543 kids—out of a population of 73 million children–have died with covid since the start of the pandemic, most of them with grave underlying health conditions, FYI.) I guess you WOULD put your kid in that brand new, experimental tube if the government/media told you it was safe. But *I’m* gullible. Mkay.”

“I stopped reading her bullsh*t when she said that the horse dewormer wiped out Covid for 250 million people, lol,” quipped one of Brandon’s friends, a gal with a photo of RBG stamped with “I DISSENT” as her profile pic.

I replied with news stories of the Uttar Pradesh victory; she replied with a “fact-checking” piece discrediting it.

Another friend of Brandon’s (with a profile byline “Be nice to one another,” YOU CANNOT MAKE THIS SHIT UP) posted a hilarious meme comparing “vaccine research” to “anti-vax mom research.” 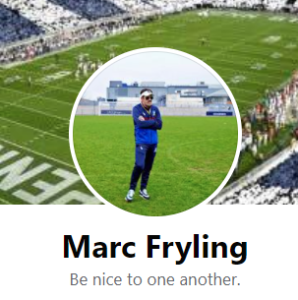 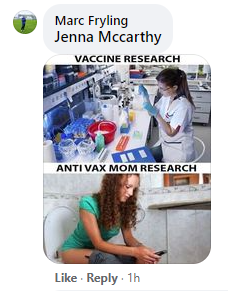 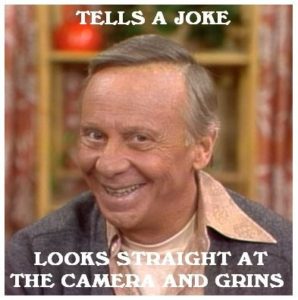 Will I ever learn?

I tried one last valiant time. “Honestly, it’s like you’re drowning and people are throwing life jackets at you and you’re shouting, ‘You’re not even a REAL life jacket designer’ as you sink.”

As far as I know, they’re still over on Brandon’s page calling me names and congratulating themselves on their rapidly diminishing immunity and remarkable ability to be brainwashed. 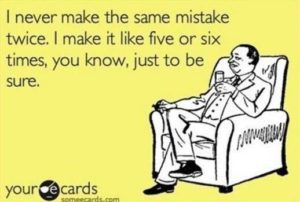