Home/Uncategorized/WIN MY NEW NOVEL!!!
Previous Next

For many, many years I wrote nonfiction exclusively. I’d tell tales about my husband and my kids and my life, and my friends and family were incredibly supportive. At least at first. Then one day I wrote a little piece about my memories of going to the beach as a child. I mused about spending unsupervised hours dodging riptides and eating junk food and procuring a nice, third-degree sunburn while my mom dozed in her lounge chair, a Kool dangling from her lips and a warm Tab in a Koozie by her side.

“I was a good mother!” she cried when it came out. Had I implied that she wasn’t? Or that the other mothers were diligently watching their children and feeding them organic grapes and spackling them with sunblock every hour? This was the 70s! That was the way it was back then. I knew that and she knew that. I hadn’t meant it as an attack; I was merely pointing out the difference a few decades—and heaps of scientific data—can make. But she was hurt, and it was my fault.

Then I wrote a first-person book about marriage, aptly (in my rarely humble opinion) titled If It Was Easy They’d Call the Whole Damn Thing a Honeymoon. The subtitle was my favorite: “Living With and Loving the TV-Addicted, Sex-Obsessed, Not-so-handy Man You Married.” I’d go great lengths to point out that it very clearly said “the man you married,” and then explain how my husband Joe was, in fact, extremely handy. (Ahem.) Because I was attempting to expose the raw and hilarious truths about the often unholy state of matrimony, I had included things like the way Joe routinely wakes me up using the famed boner-in-the-backside method and how we occasionally poop in front of each other. Despite these things—or maybe because of them—I was proud of that book. Joe, who read every draft, insisted that he was, too.

I was scheduled to appear on the Today Show on publication day. As I dressed for my segment, I got a text from my husband’s sister. “Break a leg!” I read aloud. “We’re having a viewing party. Dad’s coming, too!”

“Oh my God, my dad is going to read this book,” Joe said, slumping into a chair. He looked horrified. And again, it was my fault.

I have a quote by the brilliant Anne Lamott framed on my office wall: “You own everything that happened to you. Tell your stories. If people wanted you to write warmly about them, they should have behaved better.” I passionately agree with every word of this. But the thing is, I was writing warmly about these people and I was still hurting them.

I decided maybe I’d give fiction a try.
When I came up with the kernel of the idea for my first novel, I couldn’t wait to tell Joe.
“I have my novel idea!” I squealed.
“That’s great honey,” he said.
An eternity passed.
“Don’t you want to know what it is?”
“Honestly? I don’t really care,” he said. “As long as it’s not about me.”

And there it was. The working title for that book was actually It’s Not about You, although ultimately I changed it to Pretty Much Screwedbecause it fit the story better. And the thing is, every character in that book—and every word of fiction I’ve written since—is at least loosely based on someone I know. A lot of times they’re me. But the names are always changed so everyone feels protected and safe. Even me. 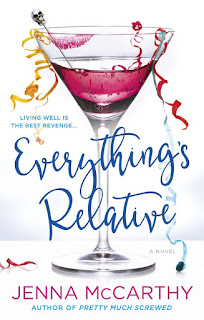 Until my latest, Everything’s Relative. I’m fascinated by family dynamics and I came up with this story about three grown siblings who lose their mom very suddenly; their dad had died long ago. The book was in its final edit phase when my two grown siblings and I—for a total of three—lost our mom (wait for it) very suddenly; our dad had died long ago. The siblings inEverything’s Relative resemble my own in some ways. The mom, at times, looks a bit like ours did. The differences between my actual life and those of my characters far outweigh any similarities (most notably, the fictitious siblings are estranged while my close relationship with my own siblings might border on pathological to some), and the book was written a year before she passed, but most people don’t know how long publishing takes. I worry they’ll think it’s thinly, poorly veiled nonfiction, which it isn’t. It’s just a story I am telling that, like any story I ever tell, might have a bit of art-imitating-life (and vice versa). I hope people love it. Don’t tell any of my other books this, but it’s my favorite thing I’ve ever written.